The greater Albuquerque metropolitan area was at one time a series of villages along the Rio Grande. And then the railroad came.

Alameda and Martineztown maps excerpted from U.S. Geological Survey topographic and historical maps from various years. USGS-authored or produced data and information are considered to be in U.S. public domain.

Alameda is along the east bank of the Rio Grande near the intersection of Alameda Boulevard and Fourth Street. There was a Tiwa pueblo here at the time of Coronado's arrival in 1540. As Spanish colonization proceeded along the Rio Grande, Alameda became one of the original Hispanic villages absorbed into the contemporary city of Albuquerque. 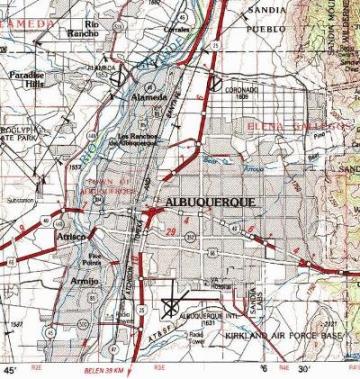 The village of Atrisco was one of the original Hispanic villages along the Rio Grande. 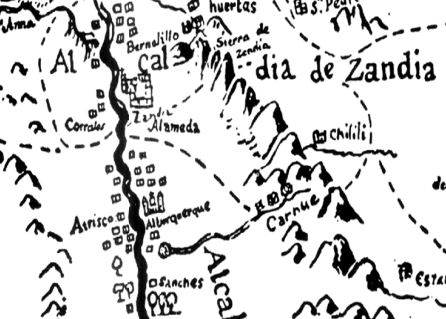 Travelers along the Camino Real crossed the Rio Grande at Barelas long before the 1926 Route 66 alignment brought tourists across the Barelas Bridge. The arrival of the railroad in 1880 and the opening of the Santa Fe Railroad shops accelerated the absorption of Barelas into the political fabric of the City of Albuquerque even as the community's cultural identity remained distinct. 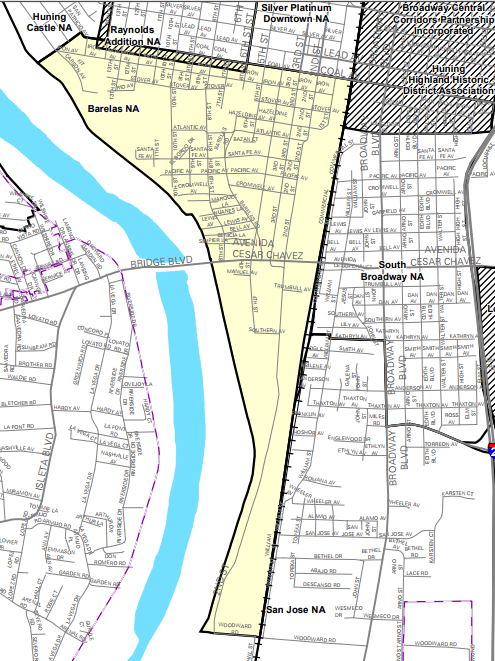 Between 1883-1911, Albuquerque City Directories indicate Chinese-American residences and businesses concentrated in the area of Silver Avenue between 2nd and 3rd Streets. At least one article in the Albuquerque Citizen of this time ("Police Court News," 8/23/1898) refers to "Chinatown," though that name was not in common use.

Dog Town (sometimes spelled Dogtown) appears to have been a term used to denote part of South Martineztown, perhaps due to a farmer named John Grogan who raised hogs in the area and had many dogs for protection. 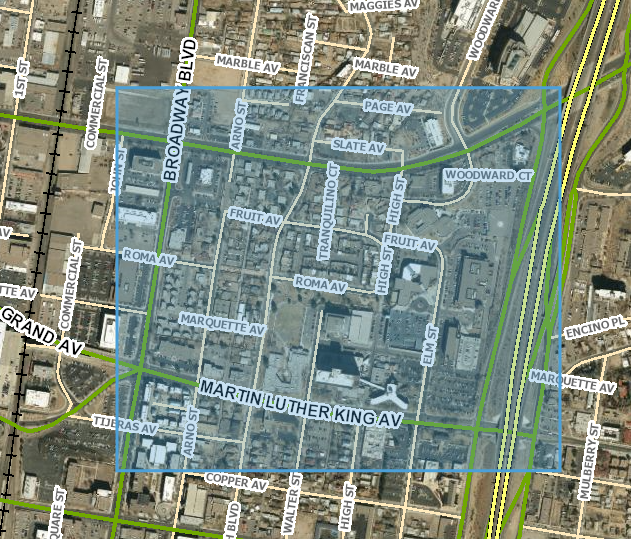 Historic Albuquerque Today calls it "a strangely neutral, out-of-place strip of territory"  between Huning Highlands, a "Midwestern Victorian suburb," and Santa Barbara-Martineztown, a "small town within the city that looks like many of the small towns of northern New Mexico." Dog Town was actively used as a name for the area between what is now Martin Luther King Avenue to the south, Lomas Boulevard to the north, Broadway Boulevard to the west and I25 to the east in the early 1900s; now it is a typically suburban area and part of the Martineztown community.

Newspapers of the early twentieth century make reference to "the northwest part of the city, commonly known as Dog Town," "Dog Town north of the Albuquerque city limits," and "Dog Town in the North Highlands." (It may have also been called Pigeon Town and become known as Las Palomitas after 1930.) Mentions often take a disparaging tone. In the Police Court roster for July 14,1902 in the Albuquerque Daily Citizen, "Dog Town was represented today, as it usually is after a wet Sunday," while the police roster of September  29,1902 finds that "Dog Town, with all their numerous troubles, failed to occupy their prominent place in police court as is their usual custom."

It appears to be an area known for fights, gang arrests, residences of "women of the half world," and disturbances of the peace, based on newspaper articles found. However, by August 20,1925, the Albuquerque Morning Journal asserted that "it has often called Dog Town, but not by its residents" and speculated that "Some people say the name came from a contraction of Adobe Town and others say it was due to the fact that several years ago every family there had from one to six dogs." Searches for information about Dog Town have proved difficult, but those interested in researching the area might consult the titles listed below.

The Village of Los Ranchos de Albuquerque incorporated as a separate municipality in 1958.

The Villa de Alburquerque was founded in 1706. The arrival of the railroad in 1880 bypassed the Villa to the east. Alburquerque and the New Town of Albuquerque that sprang up in the wake of the railroad's arrival maintained distinct cultural and political identities until 1949. In 1949, the Villa was annexed as part of Albuquerque, which helped boost the city's population from 35,449 in the 1940 Census to 96,815 in the 1950 Census. 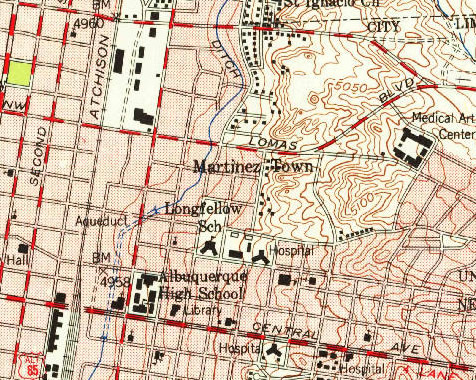