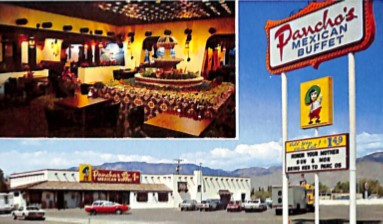 Abstract: This collection includes menus, menu guides, promotional materials, and beer mats from New Mexico restaurants, primarily restaurants in Albuquerque. Materials vary in age – some of the restaurants represented are long closed, but many of the menus are no older than 2010 and many of those restaurants are still open, though their menus may have changed in the ensuing years.

Albuquerque Tricentennial Records - about the organization, task forces,committees, projects, events, publicity and financial records of this 300n celebration of the founding of Albuquerque, New Mexico.

Bridgers & Paxton Collection - documents regarding the engineering firm Bridgers & Paxtion, including the Solar Building, which was the first active solar-heated commercial building, finished in 1956.

Citizen's Record Collection - includes records of a variety of civic projects such as Petroglyph National Monument and Albuquerque's Open Spaces.

Don Quixote Collection - includes a variety of editions of Don Quixote over the years, as well as statuary and recordings.

Fergusson-Robinson Letters - three letters from Erna Fergusson to Caroline Hadley Robinson; one letter to Louis Robinson. Uniquely personal glimpses into the life and concerns of Albuquerque's First Lady of Letters.

Independent Publishing Company Collection - Corporation record book of the company from incorporation in 1939.

Gladys Kingston Collection - This collection is a gift from Nancy Tucker, and consists of a scrapbook called The Girl Graduate: Her Own Book, a copy of the UNM Mirage yearbook from 1934, a high school scrapbook, a college scrapbook, and a signed copy of Rhymes from New Mexico by Charles E. Hodgin, all belonging to Gladys Kingston.

Map Collection (Uncataloged) - a listing of maps not currently found in the library catalog, but available for viewing.

Mayor of Albuquerque Scrapbooks - administrations of:

Menu Collection - variety of menus and coasters from local restaurants.

Newspaper issues - Albuquerque - A collection of individual issues of newspapers from Albuquerque.

Newspaper issues - New Mexico - A collection of individual issues of newspapers from various parts of New Mexico.  Dates range from 1894-1938.

Okie Joe's Petition - a petition created in 1979 to "Preserve Okie's."

Public Works of Art Donations (1934), including:

Alan B. Reed Collection - correspondence, reports, newspaper clippings and other items related to the political career of Albuquerque city councilor Alan B. Reed.

Janet Rontz Collection - illustrations of homes and other buildings in the Greater Albuquerque Area.

The Sun Newspaper Archive - the collection contains newspaper issues from both The Sun and The Albuquerque Morning Journal from May and June of 1908.  Also included is an issue of The Sun in which the editor reports an assault on himself by an Albuquerque police officer.

Nurse Florinda Thais (1905-1989) - information about Nurse Thais who was active in healthcare in Albuquerque.  She received a nursing degree from St. Joseph’s Sanatorium, Albuquerque in 1919. She attended/worked for St. Joseph’s from 1917-1923, Women’s and Children’s Hospital in 1924, St. Antony’s Hospital in Las Vegas in 1925, and at Presbyterian Sanatorium/Hospital from 1946-1958.

What Is an Archive?

An archive is "a place in which public records or historical documents are preserved; also the material preserved (often used in plural)" - or "a repository or collection especially of information." Source:  merriam-webster.com

Archival holdings are a rich and growing resource at Special Collections. Archive collections are available for in-house use only.