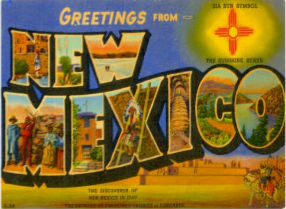 New Mexico has a rich musical history that continues to thrive today. From Al Hurricane to The Shins, our local musicians span an incredibly diverse range of styles, from indigenous music to cutting edge alternative sounds.

• To explore the work of our talented New Mexican artists, just type in the terms “local music” or “local music collection” for a subject search in the ABC Library catalog.

Enjoy the sounds of New Mexico!

Igor Stravinsky’s opera, The Rake’s Progress was performed during the Santa Fe Opera’s first season in 1957 and Mr. Stravinsky traveled to Santa Fe to oversee the production. He was so impressed by the company and the location that he spent the next six summers in Santa Fe and said that the years he spent there were among the happiest of his life.

Also at the Santa Fe Opera, The Tempest by Thomas Adès had its American premiere on July 29, 2006.

Buddy Holly, Roy Orbison, Waylon Jennings and LeAnn Rimes all made recordings at Norman Petty Studios in Clovis, New Mexico. Mr. Petty was a producer, a recording engineer and acted as Buddy Holly’s first manager. As a songwriter he was credited as a collaborator on the songs, “It’s So Easy”, “That’ll Be the Day” and “Peggy Sue”.

Jimmy Gilmer and the Fireballs, from Raton, New Mexico, also recorded their hit record, “Sugar Shack” at Norman Petty Studios. It went to #1 on the Billboard chart in 1963, eventually earning them a gold record.

Musicians with ties to New Mexico

Nels Andrews, a Kerrville Folk Festival regular and mentioned by NPR's Folk Alley as having one of the best records of 2012, lived in ABQ in the '90s and '00s.

Jason Daniello was one of the founding members of the band Naomi, one of the big local acts of the 1990s - they toured extensively and released 2 CDs.  Jason, now a solo artist, has relocated to North Carolina.

John Dieterich of Deerhoof lives in ABQ as of 2018.