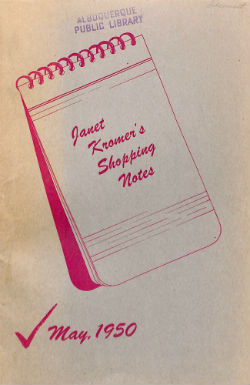 Janet Kromer’s Shopping Notes was a magazine published from 1948 to 1961.

It is helpful for researching business histories and prominent Albuquerque residents. The Shopping Notes also track the migration of the population of Albuquerque through the location of its shopping centers.

The Shopping Notes was replaced by MEMO Magazine, which began publication in May of 1961. MEMO was a short lived publication whose last issue appeared in Nov/Dec 1962.

Special thanks to the University of New Mexico's Center for Southwest Research and Special Collections for allowing us to scan issues that were missing from our collection.

What were Janet Kromer's Shopping Notes?

The Shopping Notes were self-published by Janet Kromer and printed by Valiant Printing.  The magazine was not subscription based, but privately circulated. When it ended publication, Janet Kromer’s Shopping Notes was sent to 3400 households and had an extensive waiting list.

Janet’s own description from the very first issue, published in September of 1948, describes the magazine: “I hope eventually to make it an inclusive shopping guide as well as a woman’s magazine with a distinctly Albuquerque flavor.”

The magazine was made up of a series of regular articles directed at the homemaker. These articles include a shopping guide, recipes, gossip column, and regular features on the arts.

The Shopping Notes capture a snapshot of 1950s Albuquerque in a way no other publication does, as it is exclusively about the city. Additionally, contributing writers for the Shopping Notes went on to be prominent business women throughout the 1960s and 1970s.

How can I use Janet Kromer's Shopping Notes?

The index below is a searchable .pdf that points researchers to organizations, businesses, and individuals featured in the 145 issues that were published. Use the index to identify the issue you would like to view.

To view an issue of Janet Kromer’s Shopping Notes online, select the appropriate date range from the Overview tab menu, then click on the date for the issue. This will take you to the correct issue.

A guide to using this index:

This edition of the index includes more than 24,000 lines of data. The search tool for the .pdf document enables researchers to maneuver through multiple entries over multiple issues.

Labeling individual issues and pages: The Shopping Notes were published monthly, although we are missing some issues. We have chosen to identify each issue using a yyyy-mm. The April 1952 issue is thus labeled 1952-04. The indexing begins with the first page of text as page 1. At the end of the numbered pages are the cover, inside front cover (ifc), inside back cover (ibc) and back cover (bc). The page numbers are listed this way in the index.

Name Search: It would be best to search by last name only, especially with women. Women are more frequently only referred to by their married name, i.e. Mrs. John Doe.

When a family is mentioned it would be referred to as “the John Does”. The index will list the husband’s name only in this case.

In addition, surnames were often spelled differently, most frequently in the Person to Person article. The index uses the most frequent usage.

Addresses: A small number of addresses are listed as part of the index. Search by street name only due to the change in address format in 1952. For example, “Ridgecrest” as opposed to “Ridgecrest Dr SE”.