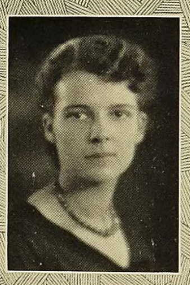 Janet Kromer was a longtime resident of Albuquerque. She moved to New Mexico in the mid-1930s from upstate New York, following her graduation from Vassar College. Janet spent time writing for the Federal Writers Project, part of the Works Progress Administration.  She then was employed by the Bureau of Indian Affairs as a teacher. Janet went on to become the “Women’s Page” editor for the Albuquerque Tribune. During the same period she was a correspondent for both LIFE and TIME magazines.

Janet was married to Tom Kromer, a published author. Tom also moved to New Mexico in the mid-1930s, as he was suffering from tuberculosis. It is possible that Tom contributed to the writing of the Shopping Notes. He wrote an article for the Health City Sun in the 1930s that is very similar to the format of the Shopping Notes.

The couple lived in a historic home in Alameda. By the late 1940s, Tom's disease and his self-medication with alcohol had turned him into a recluse. Using money she inherited from her father's death, Janet started the Shopping Notes in September of 1948. For the next twelve years, Janet did the majority of the work for the Shopping Notes from their home, as Tom needed constant care.

In 1958, Janet was stricken with lung cancer. Her staff of writers began taking over some of the duties for publication. Janet passed away in November of 1960. She is buried in an unmarked grave in Sunset Memorial Park.