Cherry Hills Library is home to eleven original works of art created in New Mexico. Eight of the pieces were funded by state or municipal initiatives, often referred to as the “One Percent (1%) for Art Programs”. The New Mexico Arts’ Art in Public Places Program (AIPP) and the City of Albuquerque’s Public Art Program and its Urban Enhancement Trust Fund (UETF) appropriate 1% of capital improvement funds derived from voter-approved bond measures for the purchase or commission of works of art. To learn more about these programs, please visit the following websites: 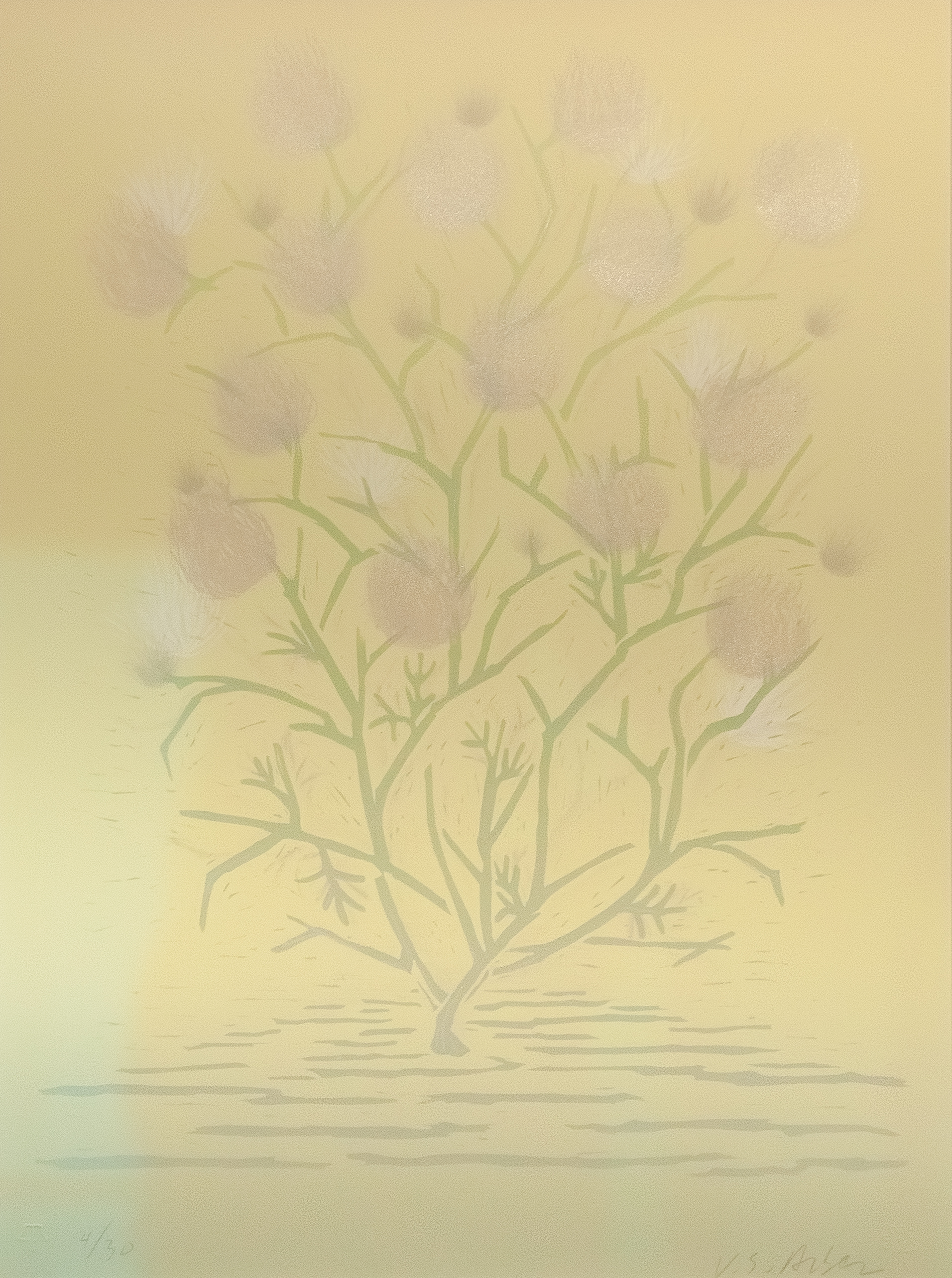 Valerie Arber created the nine-color lithograph “Apache Plume” in collaboration with Tamarind master printer Amy Goodman.  The monotype print displays branches and buds of the native Apache Plume shrub on a white background. On display in the meeting room is print # 4 of an edition of 30.  Arber was born in Englewood, NJ in 1949.  She lives in Santa Fe, NM and Marfa, TX. 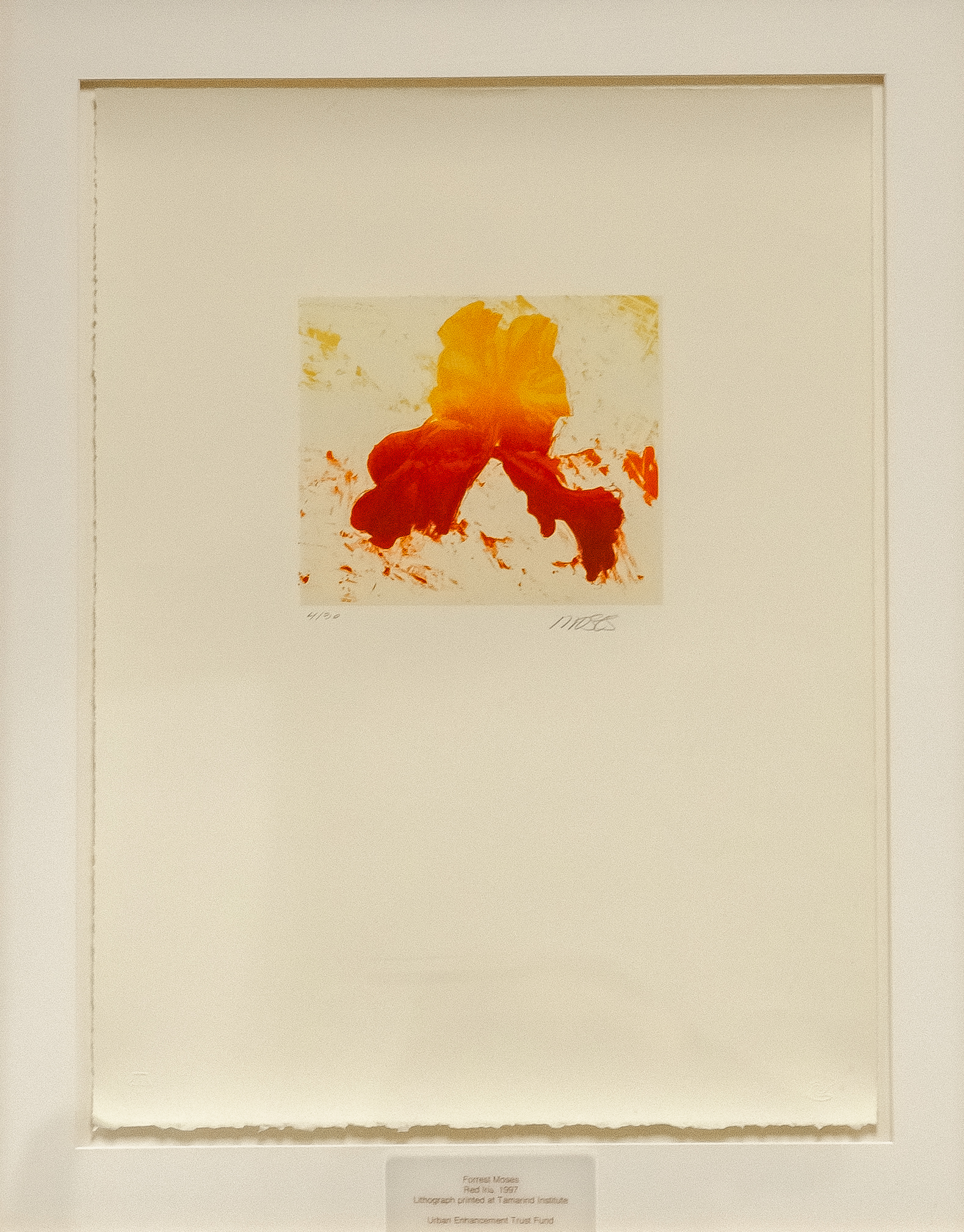 Forrest Moses’ “Red Iris” is described as an abstract lithographic print of a red iris, rendered with painterly brush strokes. The artist is well known for his image of the iris.  After completing graduate work in design at New York’s Pratt Institute, Moses went on the create artwork for more than 40 one-man shows for galleries, universities and museums across the country. His work is established in many private, public and corporate collections. Born in Virginia in 1934, New Mexico has been Moses’ home since 1969. He explores specific landscape locations from coast to coast, recording images with a camera, and translating them into works in oil, monotype and watercolor. 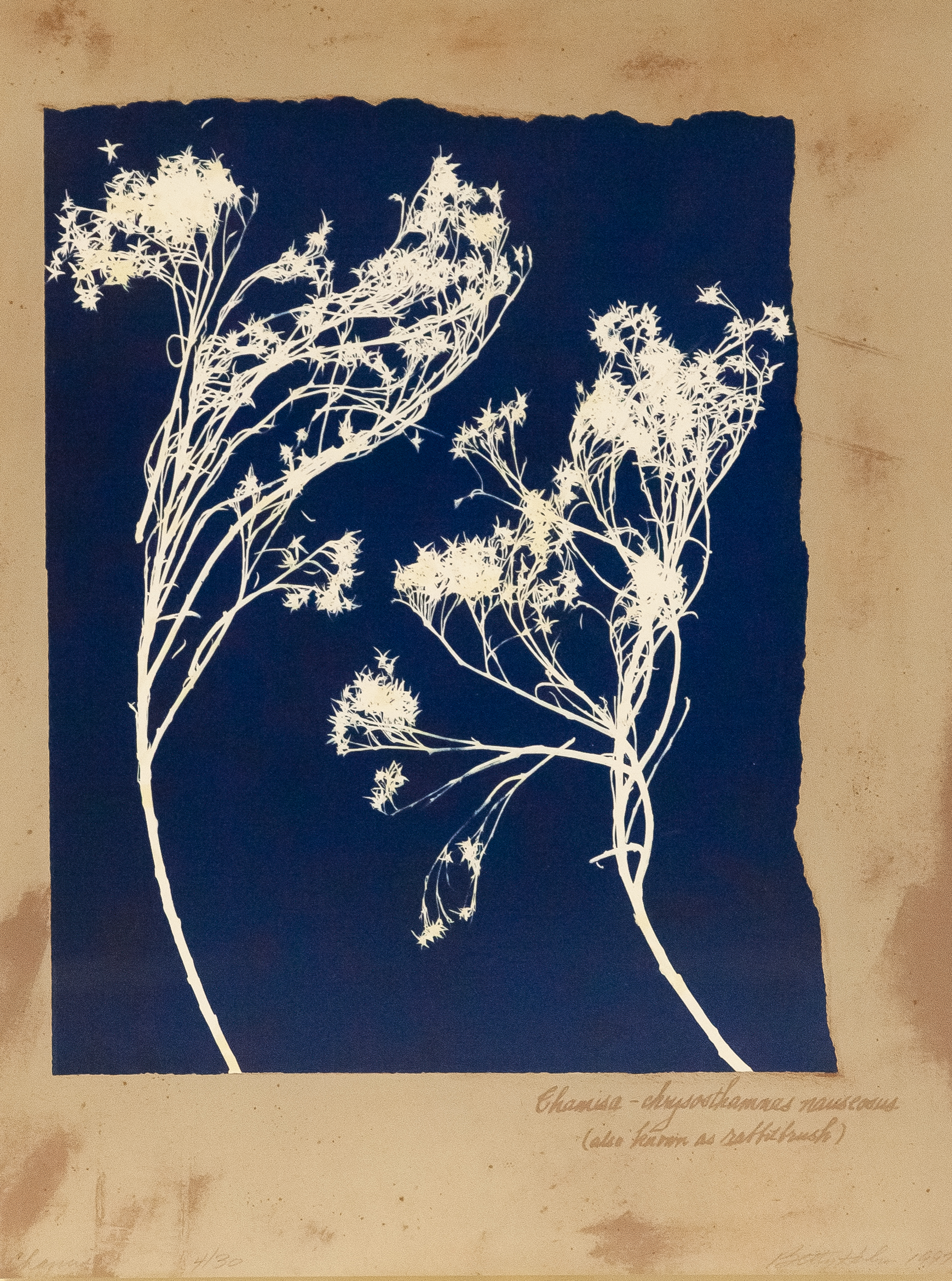 “Chamisa” is a multi-color lithograph by Betty Hahn depicting white silhouettes of chamisa flowers against a blue background. The work was created in collaboration with Tamarind master printer Ross Zirkle. Born in Chicago in 1940, Betty Hahn completed her MFA at Indiana University in 1966, experimenting with alternative photographic processes. Robert Rauschenburg and Andy Warhol were important influences on her and Hahn has often used photographic imagery in combination with a variety of other media, such as lithography, painting, or embroidery. Her techniques challenged established ideas regarding the medium’s presentation. Hahn's thirty-year retrospective at the Museum of New Mexico, Santa Fe in 1996 was titled, "Betty Hahn: Photography or Maybe Not." 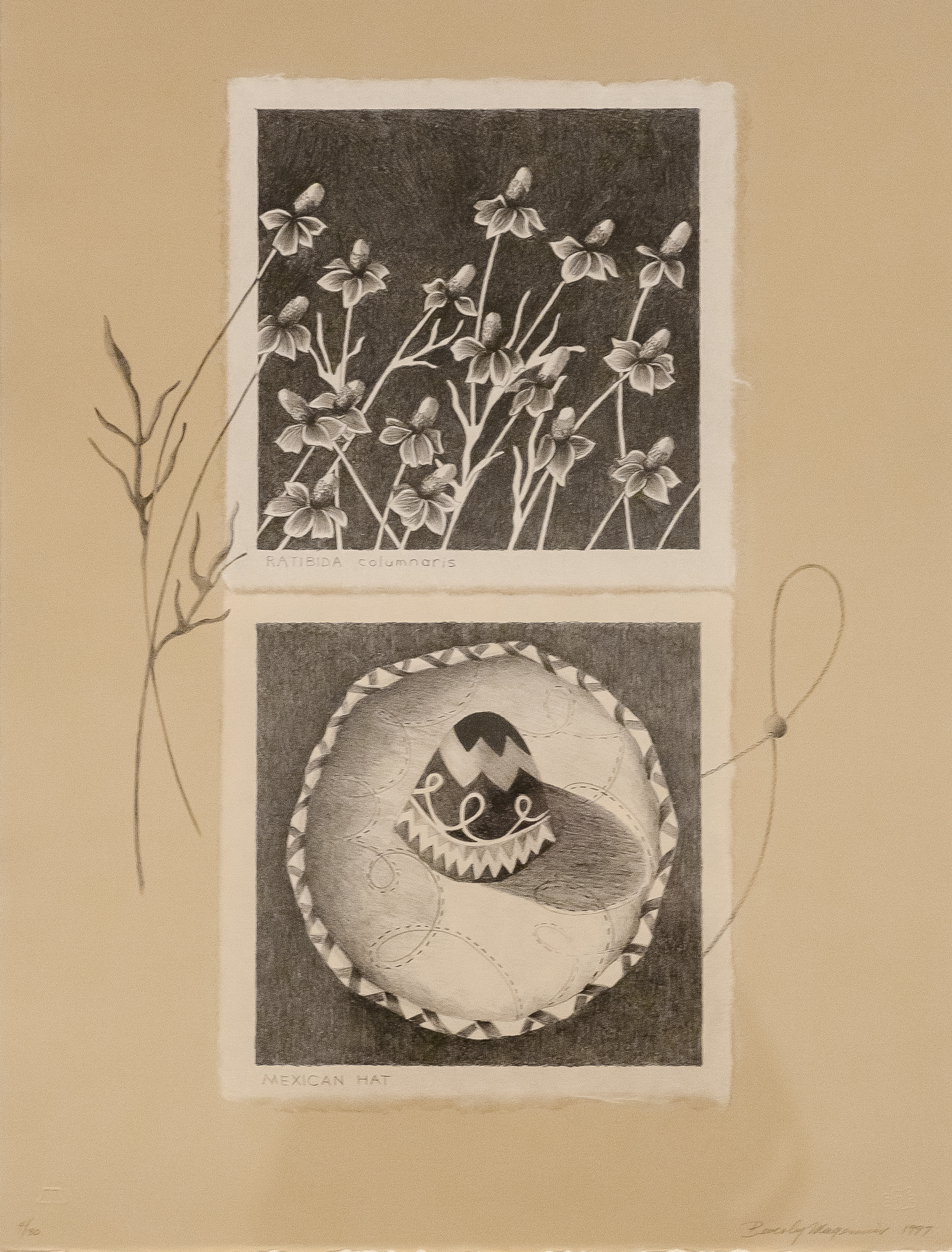 “Mexican Hat” by Beverley Magennis is a single-color lithograph print depicting both the so-named flower and a Mexican sombrero in an illustrative style. It was produced in an edition of 30 in collaboration with Tamarind master printer Amy Goodman. Beverley Magennis was born in Toronto, Canada in 1942 and lives in Albuquerque, New Mexico.  She is a visual artist turned writer and is best known locally as a ceramic sculptor. She spent eleven years covering her house with ceramic tile and filling the garden with her exuberant sculptures. The house is on the Cultural Registry of the City of Albuquerque. 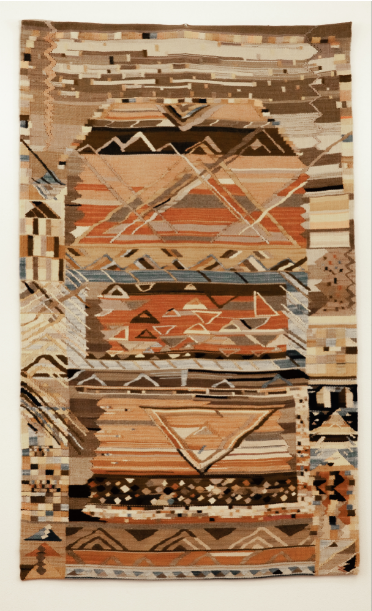 Displayed on the high wall above the entrance to study room #1 is Donna Martin’s vegetal dyed wool and mohair tapestry entitled “The Story Goes Like This…”.  The piece, which depicts abstract and impressionistic landscape scenes, was created in 1997. The acquisition was funded by the New Mexico Arts’ Art in Public Places Program and the tapestry was installed in the library in 1999. 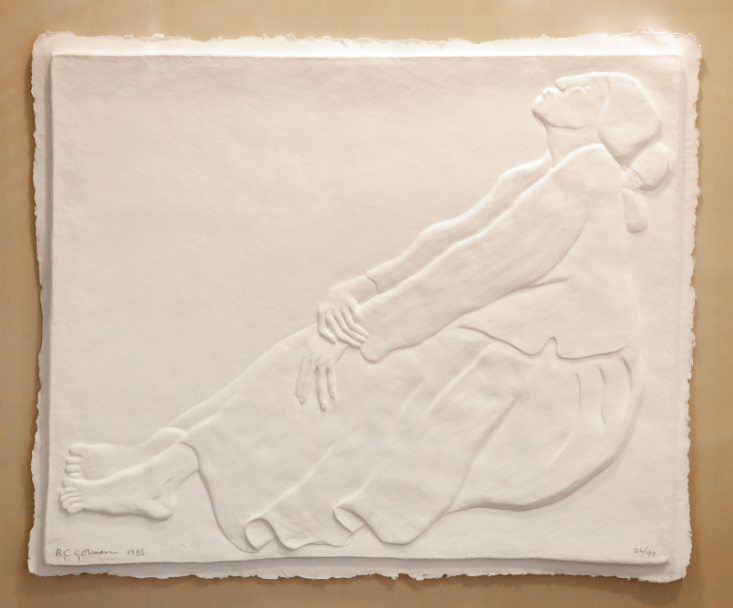 R.C. Gorman’s 1985 hand cast paper white figure in bas-relief entitled “Reclining Woman 26/90” was donated by Lester Henriksen in 2015 to the Cherry Hills Library in memory of Barbara Smiley Henriksen and hangs on the wall next to Study Room #2. Cast Paper is a paper crafting technique in which paper fiber or pulp, such as cotton fiber paper, is formed using a mold. The pulp may consist of pure fiber, or be an amalgam of fiber, binder, and filler, such as papier-mâché. The technique is employed for in-the-round sculpture as well as bas-relief (shallow-depth sculpture). 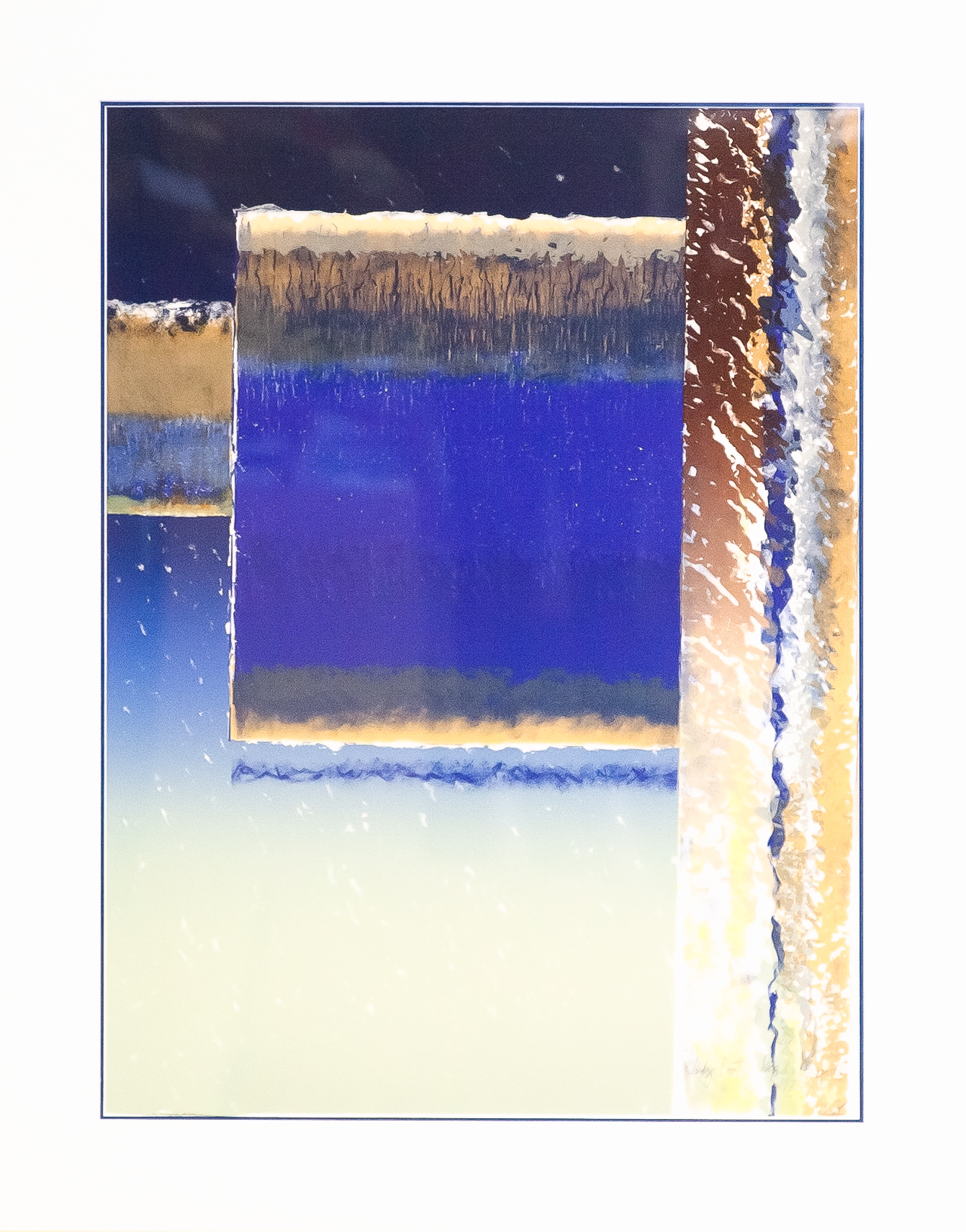 Hanging to the left of the east-facing windows in the public sitting area is an untitled multi-color lithograph by Jacqueline Gourevitch, produced at the Tamarind Institute in 1973 in collaboration with master printer Chris Cordes. It is print #20 of an edition of 20 and is inscribed by the artist “For Judy Booth”. Judy Booth was the assistant director and curator at the Tamarind Institute in the 1970’s. Eventually acquired by the city, the piece was selected for display at the Cherry Hills Library in 2006.

"School of Fish" Chinese Ink and Pastel on Handmade Paper by Del Lack, 1998 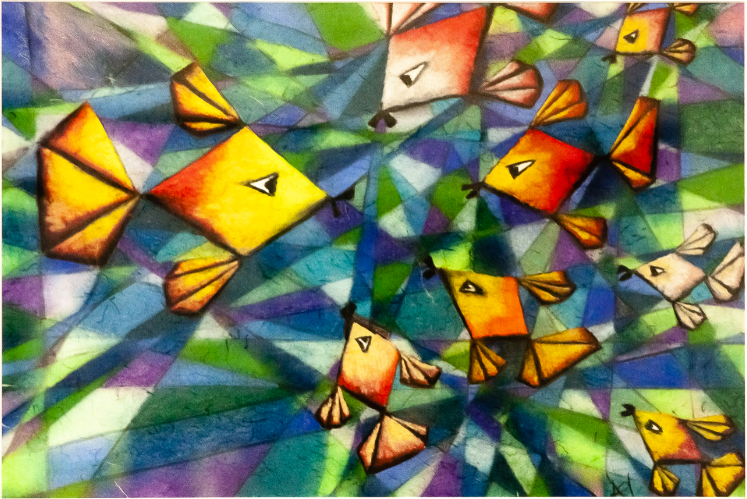 Located on the wall at the end of the reading cubbies in the children’s area is “School of Fish” by Del Lack. It was purchased by New Mexico Arts’ Art in Public Places (AIPP) program for display in the library in 1999. The piece is an example of abstract art which employs a technique called continuous contour drawing. Using this method, a single unbroken line is used to develop the outlines or contours of the image. Del Lack is an artist and a teacher from Alamogordo, NM.  After nineteen years of working with clay, Lack switched solely to drawing after discovering this technique.

Installed on the high wall in front of the west windows of the children’s area is a graphic mural produced by Holly Hitzemann, Reliable Reproductions, and Homewood Construction. It depicts the forms of children flying on books above the earth’s surface. According to Ms. Hitzemann, a member UNM’s Anderson School of Management professional faculty, she and her sister wished to make donation to the library and worked together along with the reprographics firm to create the mural and mount it to the wall. 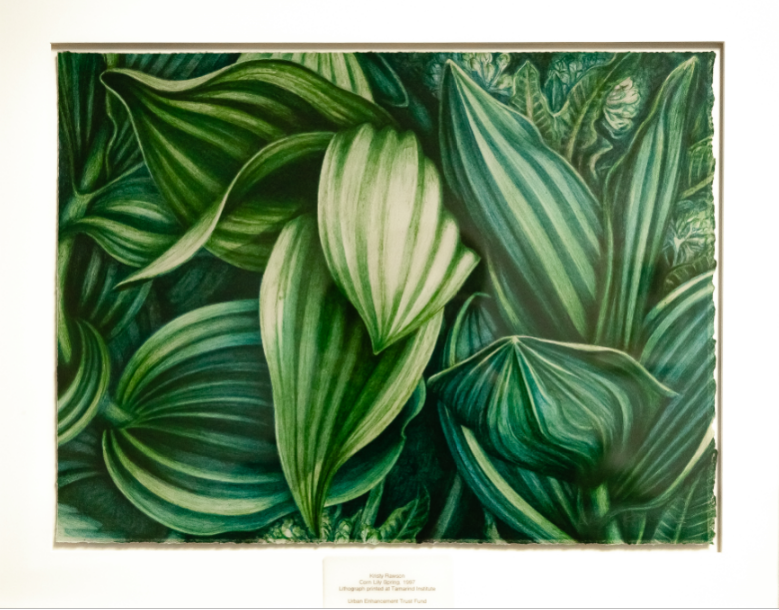 “Corn Lily Spring” is a four-color lithograph depicting dense green foliage and leaves, created in collaboration with master printer Ross Zirkle.  An edition of 30 prints was produced. Kristy Rawson was born in 1963 and graduated from the Tamarind Institute in 1996.