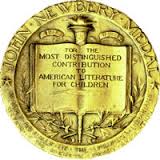 This is a complete list of the books that have won the Newbery Award.  Click on the title to see if the book is available.  If you want to find a Newbery winning book that is funny or scary or mysterious or serious, click on the "Find a Good One" tab.