The Herald of the Well Country 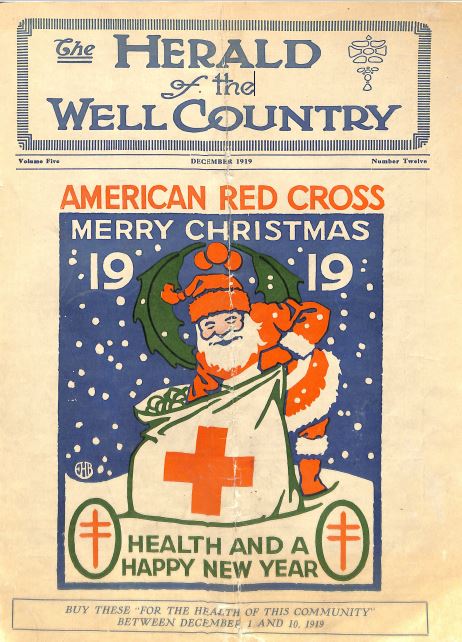 Special thanks to the University of New Mexico's Center for Southwest Research and Special Collections and The Huntington Library for allowing us access to issues that were missing from our collection.

The Herald of the Well Country

What was The Herald of the Well Country?

The Herald of the Well Country was a magazine published from September 1914 to June 1920. It was proceeded by The Killgloom Gazette, published from January to August 1914. The Herald discontinued publication from May 1915 through to April 1916.

One issue of the Well Country Journal was published October 1921. Though not associated with The Herald, it attempted to copy its format.

It started as a magazine filled with content to make its readers laugh, to kill the gloom. The Herald was designed for healthseekers, those suffering from tuberculosis. It was the only pulication of its kind at the time, a magazine FOR healthseekers, written BY healthseekers.

How can I use The Herald of the Well Country?

The index below is a searchable .pdf that points researchers to sanatoriums, doctors and individuals featured in the 65 issues that were published. Use the index to identify the issue you would like to view.

The Herald is useful for tracking those to came to Albuquerque chasing the cure during the 1910s, and the sanatoriums and doctors that treated them.

To view an issue of The Herald of the Well Country online, select the appropriate date range from the Overview tab menu, then click on the date for the issue. This will take you to the correct issue.

A guide to using these indexes:

The below two indexes include more than 9000 lines of data. The search tool for the .pdf document enables researchers to maneuver through multiple entries over multiple issues.

Labeling individual issues and pages:  Both magazines were published monthly, although we are missing some issues. The Killgloom Gazette did not print in April 1914. In addition, the magazine ceased publication following the May 1915 issue, and began again in April 1916.

For issues printed from May 1914 through April 1915, the indexing begins with the first page of text as page 1. At the end of the numbered pages are the cover, inside front cover (ifc), inside back cover (ibc) and back cover (bc). The page numbers are listed this way in the index.

Name Search: Names on the index are listed in their entirety, but may appear in the magazine by first or last name only.

In addition, surnames were often spelled differently. The index uses the most frequent usage or as spelled in the City Directory.