President Abraham Lincoln established the standard rail width of four feet, eight and 1/2 inches (56 & 1/2 inches) for the Transcontinental Railroad project. The standardization was essential because several different companies were involved in the huge project.

However, many of the secondary lines and smaller companies that came later in the Southwest used narrow gauge railbeds and equipment, ranging from 2 feet to 3 & 1/2 feet in width.

As the equipment used on these railways was smaller and lighter than on the main lines, investment outlay was less. The not-insubstantial cost of preparing the railbed and building bridges was also reduced. Narrow gauge lines were better suited to mountainous terrain, requiring less footprint on slopes and allowing for tighter curves in the line.

Because narrow gauge railways were easier and less expensive to develop, they were often utilized for "branch" or "spur" lines between the major lines, as short runs within project sites, or laid temporarily to allow exploitation of lumber or mineral resources. Once the resource dried up, the rails were taken up and moved for use elsewhere.

Many of the railways in the Southwest that are now remembered with nostalgia -- the Denver & Rio Grande "Chile Line"; the Rio Grande Southern; the Denver, South Park & Pacific -- were narrow gauge lines built through mountainous territory. Whenever people think of the classic image of a steam locomotive chugging through spectacular high country, chances are that it is a narrow gauge train they are envisioning.

Two heritage narrow gauge lines are still in operation in the Southwest, allowing people to revisit the heyday of narrow gauge travel. In New Mexico the Cumbres & Toltec Scenic Railroad uses original equipment over a railway developed in 1880; Colorado's Durango & Silverton Narrow Gauge Railroad has been in continuous operation for over 130 years.

The Cumbres & Toltec Scenic Railroad
offers day trips May through October
over historic narrow-gauge lines
through northern New Mexico.
Advertised as "America's longest and highest
steam-operated railroad", the Cumbres & Toltec
offers visitors a taste of the past as they
ride this line originally built in 1880.

The Albuquerque BioPark maintains two
narrow gauge railways, the
Thunderbird Express which loops around the Zoo,
and the Rio Line which transits between the
Zoo and the Aquarium & Botanic Garden.
Model train layouts are also featured seasonally. 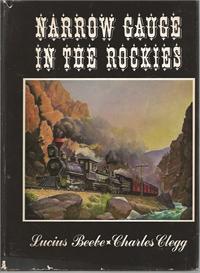 Narrow Gauge in the Rockies by Lucius Beebe and Charles Clegg

This is the story of the three-foot cars and engines on which an entire generation of the Colorado Frontier rode to golden destinies of riches and romance. It is augmented by a matchless album of photographs by the masters in this field, and told by authors whose appreciation of this dramatic period of Western growth has no equal.

No other chapter in the gorgeous saga of railroading is so heavily freighted with the old West as the narrow gauges, the powerful Denver & Rio Grande, the wistfully remembered South Park, and the incredible mountain carriers built by Otto Mears to achieve mining camps and remote diggings impervious to the standard operations of mainline railroads. In no part of the United States of the nineteenth century and the expanding frontier was the entire economy of a region so closely integrated to the operations, at once primitive and luxurious, of an interlocking system of railroads of such emphatic character and possessed of such atmospheric overtones. - from the book jacket