The Harvey House was an oasis of comfort and civilization along the railway routes of the Southwest.  Entrepeneur Fred Harvey, dismayed by the often crude facilities he had seen at railway stops, endeavored to provide clean and welcoming lunchrooms, restaurants, and hotels as alternatives. His name became synonymous with quality accommodations -- an image fostered by clever and attractive advertising which drew in tourists from around the world. The Harvey House chain also offered tours to cultural, geological, and archeological attractions, further opening the Southwest to visitors. Harvey had close connections with the Santa Fe Railway, contracting to provide dining services along the line; this mutually beneficial association allowed Harvey to use the railroad for free shipment of supplies, while providing railway passengers with quality rest stops.

Fred Harvey is also famous for recruiting the Harvey Girls: young, decent, hardworking women from around the country to serve as hostesses in his lunchrooms. Having created the first restaurant chain in the United States (even while part of the country was still territorial rather than actual states), Harvey needed staff who could keep to his high standards.  So he advertised in the East for women 18 to 30, pleasant, competent, attractive, and willing to meet his expectations for civilized behavior. Besides their pay they would receive room and board. Thousands applied and the best were hired; for many of the young women, it was the first time they had left home.

The Harvey Girls became not only a famous feature of the Fred Harvey chain, but their standards for cleanliness and decorum are credited as having a civilizing effect on the often rough customers in "the territories". They not only helped civilize the Wild West but also populate it, as thousands of "the Girls" married their bachelor customers and settled down in the West. (Folk tradition has it that many a male offspring of such unions were given the name of Fred or Harvey, in honor of where their parents had met.)

The Harvey Houses faded with decreasing passenger use of the railroads, but left a legacy of style and expectations for Southwestern tourism which lingers to this day.

Harvey Houses and the Harvey Girls

Fred Harvey Houses of the Southwest by Richard Melzer 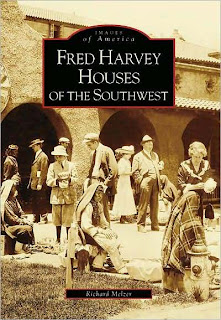 The Fred Harvey name will forever be associated with the high-quality restaurants, hotels, and resorts situated along the Atchison, Topeka, and Santa Fe Railway in the American Southwest. The Fred Harvey Company surprised travelers, who were accustomed to “dingy beaneries” staffed with “rough waiters,” by presenting attractive, courteous servers known as the Harvey Girls. Today many Harvey Houses serve as museums, offices, and civic centers throughout the Southwest. Only a few Harvey Houses remain as first-class hotels, and they are located at the Grand Canyon, in Winslow, Arizona, and in Santa Fe, New Mexico. - from the publisher

Part of the "Images of America" series, this book presents vintage images of the Fred Harvey facilities during the heyday of luxury train travel across the Southwest.

Fred Harvey created the first restaurant chain in the United States (even while part of the country was still territorial.) The Harvey House chain of lunchrooms, restaurants, and hotels maintained very high standards, and Harvey wanted staff to match. So he advertised in the East for women 18 to 30, pleasant, competent, attractive, and willing to meet his expectations for civilized behavior. Besides their pay they would receive room and board. Thousands applied and the best were hired; for many of the young women, it was the first time they had left home.

The Harvey Girls became not only a famous feature of the Fred Harvey chain, but their standards for cleanliness and decorum are credited as having a civilizing effect on the often rough customers in "the territories". This civilizing influence became even more lasting when thousands of the "Girls" married customers, to settle in the West.

The Harvey Girls: the women who civilized the West by Juddi Morris 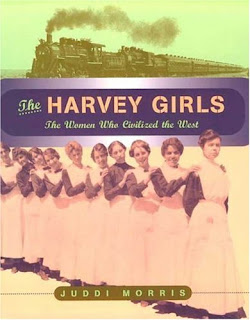 The Harvey girls : women who opened the West by Lesley Poling-Kempes 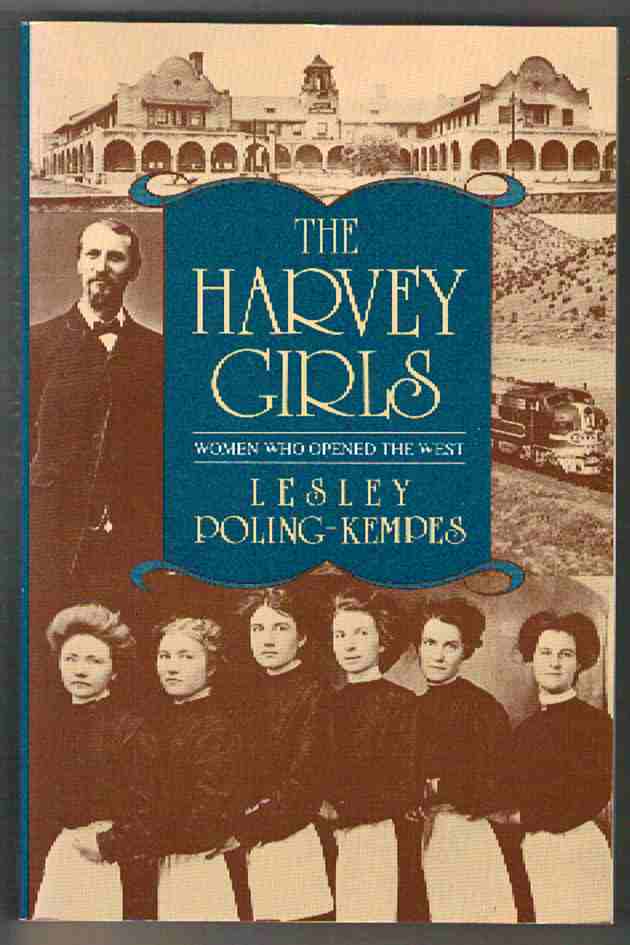 The Harvey House Cookbook: memories of dining along the Santa Fe railroad by George H. Foster and Peter C. Weiglin 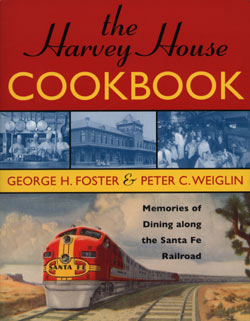 In the 1870s, people traveling west of the Mississippi were still venturing into the wild. Loud, smoke-belching trains might have cut across the rough terrain, but harsh weather, rigid seats, and short breaks for bad food in the middle of nowhere showed that the West was by no means won. Entrepreneur Fred Harvey had an eye for such problems and a verve for the impossible. In 1876, he began establishing high quality dining rooms along the Santa Fe Railway, and his Harvey Houses helped change the entire picture of the American West. Recapture the sprit of the first Western railway excursions with The Harvey House Cookbook. Its 200-plus vintage recipes (many simple to prepare), numerous period photos, and fascinating Fred Harvey story will take readers back to one of America’s legendary experiences in the Old West. - from the book jacket

The great Southwest of the Fred Harvey Company and the Santa Fe Railway / edited by Marta Weigle and Barbara A. Babcock 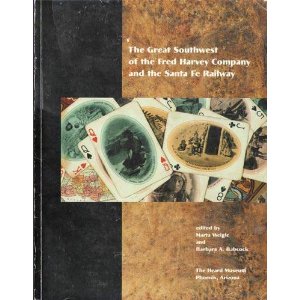 Produced in connection with the exhibit 'Inventing the Southwest: The Fred Harvey Company and Native American Art,' curated by Diana Pardue and Kathleen Howard

Inventing the Southwest : the Fred Harvey Company and Native American art / by Kathleen L. Howard and Diana F. Pardue ; in cooperation with the Heard Museum ; foreword by Martin Sullivan 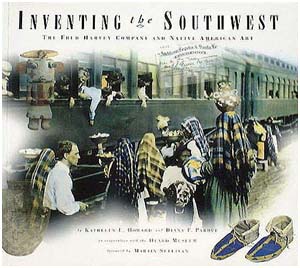 "The Fred Harvey Company and the Santa Fe Railway joined forces at an auspicious historical moment. Borrowing new techniques in marketing and advertising, the companies promoted the American Southwest as an exotic destination. The railroad, the travelers, and the indigenous communities of the region were all integral elements in a partnership that spanned more than three-quarters of a century." - from the foreword

The Southwestern Indian detours : the story of the Fred Harvey/Santa Fe Railway experiment in detourism / by D.H. Thomas

The Alvarado Hotel (VHS) by KNME-TV. The Alvarado was the Fred Harvey property in Albuquerque, designed by Mary Jane Colter and torn down in 1970.

The Harvey House in Belen NM still stands and has been preserved to give visitors a taste of that time. Housing the Belen Harvey House Museum, the structure is also home to the Belen Model Railroad Club, which maintains a large working model train exhibit in the building.

The Museum holds exhibits and memorabilia pertaining to the railroad and Harvey House period in New Mexico. A Gift Shop features railroad-related items.

The Museum is free to the public. It is open Tuesday through Saturday from 12:30PM to 3:30PM, and Sundays from 1PM to 3PM. Donations are accepted.

The Harvey House Museum in Belen