Who was Erna Fergusson?: Overview

About Erna Fergusson's life and works.

Some books featuring Erna Fergusson that can be found in the library catalog.

For more information about Erna Fergusson: 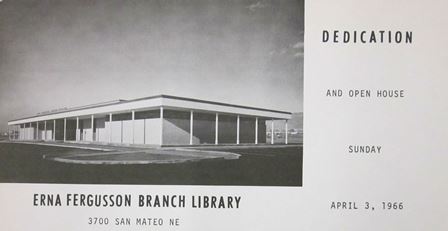 The Erna Fergusson Library was the sixth library to be opened in Albuquerque. The original building was built in 1966, after a branch location study suggested the location would be a good fit for a new library, with its access to San Mateo Boulevard, room for off-street parking, and proximity to shopping areas and the new high school, Del Norte, being built nearby. The City Commission authorized the library to be named for the author in January 1965 after a suggestion from the library board.

The current building was reconstructed and expanded in 2003 by Cherry/See/Reames Architects PC, with Newt and Butch, Inc., as the general contractors. Plans for the renovation began in 1992. It is 15,227 square feet and opened with a collection of over 100,000 items. 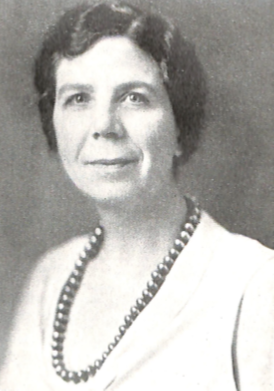 Who Was Erna Fergusson?

She was an independent person in every way: in her thinking, in her approach to people... She made life interesting...

Ernestine Mary Fergusson was born on January 10, 1888, in Old Town, the first child of Harvey B. and Clara Fergusson, the granddaughter of New Mexico pioneer, merchant, and developer Franz Huning. She grew up in "La Glorieta" (now Manzano Day School), but often visited her grandparents at their nearby home, Huning Castle. Her father Harvey, a transplant from Alabama, was an attorney who became a New Mexico territorial delegate to Congress, later the new state's first congressman.  There are stories of Erna - named for her grandmother Ernestine, she preferred the shortened version of her name - that suggest she was a brave, curious, scholarly child who inherited an interest in the peoples of the Southwest and a sympathy with the poor and oppressed from her father and grandfather.

Erna attended public and private schools, including stints in Europe and California, and received private instruction. Her later education included a bachelor's degree in pedagogy from the University of New Mexico and a master's degree in history from Columbia University. She taught in the Albuquerque Public Schools, from 1908 to 1919 - the 1916 edition of La Reata (the Albuquerque High School yearbook) is dedicated to her.

After teaching, Erna bounced around a bit in her search for a career, but her interests remained literary and cultural throughout her lifetime. During World War I, she was the state's Red Cross Home Service Secretary and State Supervisor, "a post that pushed her into every part of New Mexico, every pueblo, every remote Hispanic village." (1)  Later, she was briefly a reporter for the Albuquerque Herald, contributing a column called "Do You Remember?" And then she entered the profession that would set her on course for the rest of her life, becoming known as the first woman dude-wrangler.

The story behind her dude wrangling adventures is that Erna and a friend wanted to see the Penitentes and had the idea of taking a group along to share expenses when they realized they didn't have the funds to go on their own. This led to arranging day trips for friends and neighbors, and then for tourists whom Erna felt "needed to be hand-led through Indian country." (2) She founded Koshare Tours - named for the sacred Pueblo clown - with Ethel Hickey in 1921. Sunset Magazine wrote a glowing review of her as "a delight maker," a play on the translation of Koshare, explaining

People from all over the country have the habit of coming back season after season, leaving it entirely to Miss Fergusson to plan their vacation for them. She relieves her travelers of all responsibility for themselves; provides them every night with the best bed available, at a hotel if there is one within striking distance, on an air mattress under the sky or perhaps in an Indian home or a remote rancho; feeds them iced cantaloupe and crisp salads in the middle of the blistering desert in summer, and hot tea and sandwiches in late winter afternoons when dinner is several chilly hours further up the highway. And she tells them more than they can possibly remember about the history, folk lore and customs of the people and places they visit. (3)

For five years Erna and Ethel operated their guide service to the pueblos by motor, horseback, and airplanes, jaunts ranging in distance from 13 miles to Isleta and 1,000 miles there and back to the Hopi Reservation. Profiles of Koshare Tours appearing in magazines during this era tend to read as ethnocentric today, but these testimonials established Erna's role as a cultural ambassador for the Southwest.  Later, when the Koshare tour operation was acquired by Fred Harvey Tours, Erna stayed on briefly as director of courier service, recruiting and training female guides for Harvey's Indian Detours.

But she was ready for another career change. Her brother Harvey, a novelist himself, suggested that she write a book about the Indian dances she loved, telling her that any fool could write a book. You can almost see the twinkle in Erna’s eye when she tells one interviewer "And so…I proceeded to prove him right." (4) Harvey’s suggestion became her first book, Dancing Gods: Indian Ceremonials of New Mexico and Arizona. Erna wrote fourteen books between 1930 and 1955. Nearly all of her books were about the Southwest or Latin America. Her books always started with a journey to the area in question, up to 20,000 miles of travel to research her topic, often during times of conflict and enduring many kinds of personal discomforts. Contemporary reviews of her books laud her for vivid, colorful descriptions, her shrewd observations and interpretations of her experiences, her warmth and wit, and the conversational style of her writing. Her friend Lawrence Clark Powell staunchly defended her writing skills: "Each book was the result of both fieldwork and scholarly reading. Her papers bear abundant witness to the methods she employed in documenting her work. Voluminous data was gathered and indexed. Scrapbooks and photographic albums were compiled. Yet most any writer can do as much. What lifted her books to the level of literature was the personal vision which illuminated her material." (5)

Today, only her two most popular books, Dancing Gods and Mexican Cooking, are still in print, available from The University of New Mexico Press. It’s a sad final chapter in the story of an author who, before travel became widespread, "helped make the Southwest and Latin America seem like real and accessible places...was read widely...was the twentieth century's popularizer of the Southwest," (6) but travel literature, which her works are best classified as, quickly becomes outdated. Her biographer, Robert Gish, says "much of her commentary and many of her assumptions and points or argument seem ethnocentric and paternalistic. But Fergusson’s heart was very much in the right place as an advocate of equal rights for all races and cultures."(7)

In addition to her own writing, Erna helped found the Albuquerque Historical Society, formerly known as the Old Town Historical Society, in 1947. Around that same time, she was on the Ernie Pyle memorial committee that created the library from his house. She had a long history of library advocacy – in a talk she gave, she told her listeners, "I am perhaps one of the few people that you may have known who has come all the way with her town library. I remember the first library, I am an ardent supporter of the present-day library, and I think I have known enough kinds of libraries, librarians, and library users along the way, to give you a picture." (8)

Erna was a sought after guest lecturer, speaking at “silver tea” fundraisers, appearing many times as the opening lecturer in UNM's "Lectures Under the Stars" series (1935-1959), and invited to give talks at other scholarly institutions, such as UCLA and the University of Nebraska. At home, she created a kind of salon, welcoming guests from all walks of life, from scientist Robert Oppenheimer to writers and artists, to her neighbors.

Erna also received some recognition for her work during her lifetime. The University of New Mexico later gave her an honorary doctorate of letters in 1943, the first woman receive that honor from that university. She was given an honorary membership in Theta Sigma Phi, the national women's journalistic fraternity. The New Mexico Women's Press Club awarded her the 1955 Zia Award for her outstanding contribution to the field of journalism.

Erna Fergusson died on July 30, 1964, after a period of illness, including arthritis and a hip injury that had curtailed her activity and, finally, cancer. Her unfinished projects included a proposed biography of Clyde Tingley and a historical novel about Malinche, a Native American woman who aided Spanish conquistador Hernán Cortés.

In August of 1964, the Historical Society of New Mexico passed a resolution honoring Erna Fergusson's contributions to New Mexico and said that her writings had "justly won her the title 'First Lady of Letters in New Mexico.'" (9) The same month, Albuquerque attorney W. A. Keleher spoke at her memorial, saying

Erna Fergusson's friends and admirers crisscrossed the country. Authors, poets, publishers of national repute always called on her when in or near Albuquerque. Active participation in civic projects spanned her zeal for saving her beloved cottonwood trees from the inroads of a bulldozer to the preservation of our heritage through the medium of the Old Albuquerque Historical Society. Her roots went deep into the soil of New Mexico. She loved it with a passion. New Mexicans were always proud of the fact that she never had any desire to make her home elsewhere. One remembers especially her loyalty to family, friends, political party; her sparkling wit, her tolerance, and her compassionate interest in humanity. (10)

(8) "A Writer's View of Southwest Libraries," by Erna Fergusson

Fair Use: This author photo above was found in a variety of magazines and book jackets without copyright information. It is used here to serve as the primary means of visual identification at the top of the LibGuide dedicated to the person pictured. 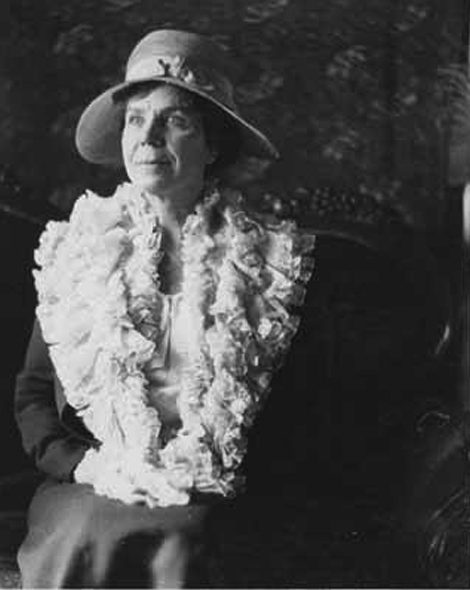 Books by Erna Fergusson that can be found in the library catalog.

Please note that because some of these titles are out of print, there may not be circulating copies.

Erna In Her Own Words

New Mexico, glory of scenery, marvel of climate, ease of travel and good living can offer something that is found in few parts of the world. Our whole history is here, now, living, going on, in the immediate present. Old Charles F. Lummis summed it up better than anybody has since when he said, "In New Mexico you catch your archaeology alive." In New Mexico, the trick now seems to be to catch your tourist alive; or if he is pretty deadened by life in dull places or by driving too fast, to bring him to life and show him how beautiful life may be if it moves at a leisurely pace.

My point of view on libraries is that they are the most useful institutions in the world. I am entirely in favor of all the research that went into them, all the information that is contained in them...Albuquerque and New Mexico still have the same terrific problem : How to make people realize that money invested in books, in actual books, is a good investment in the life of the town... Librarians, who certainly are hopeful people - because how else could they keep going? - think that given one generation - wait until these children out of the fourth and fifth and sixth grades are adults - they'll be coming to the bookmobile and asking for their books.

~from  "A Writer's View of Southwest Libraries"

I wish you could sit on my portal now. There's a foreground of dull gold dry fields, with swatches of red willows, dark elms, silvery cottonwoods getting ready for spring, the incredible blue of the Sandias, pricked out with snow, and the even more incredible blue of sky with sitting clouds.

~in a letter written late in life to Lawrence Clark Powell