Best of the Year: Staff Picks

See more staff favorites
from past years in our catalog. 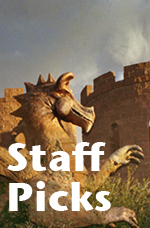