Center for the Book 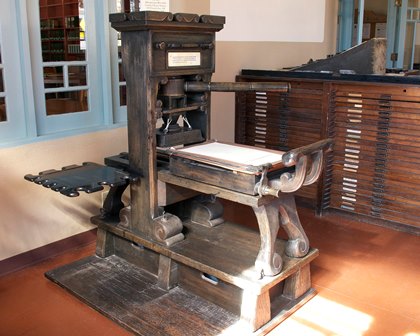 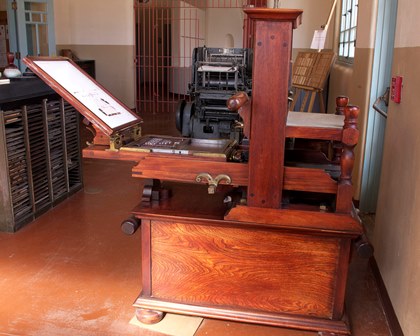 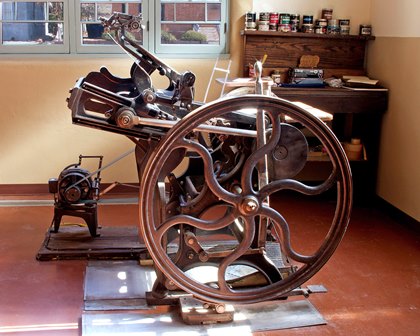 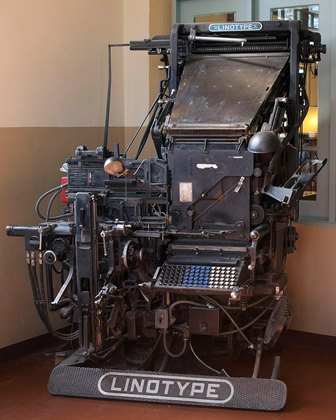 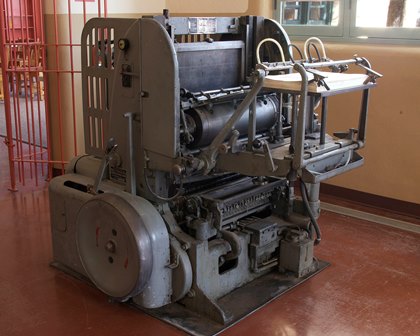 Richard Hicks (1922-2012) was a master woodworker who crafted the replicas of the Medieval and the Common or Bobcat presses in the Center for the Book. Hicks received commissions for replica presses for customers as diverse as the Minnesota Renaissance Festival and the Xerox corporation. Students who visit Center for the Book during field trips use one of his Common press replicas to print a page as a souvenir.

Before the arrival of the Common Press, books in the Middle Ages were produced entirely by hand or by using the block method—entire pages of text were carved into wooden blocks which were then inked and used to print pages. Both methods were labor-intensive and slow, meaning that the production of books was rare and owning one was considered a luxury.

In the 1400s, a goldsmith named Johannes Gutenberg began experimenting with the concept of moveable type. His goal was to create a method of printing that allowed the printer to set and rearrange letters and special characters on a press in order to make printing both faster and easier. Moveable type had already been used in China and Korea in the 13th century, but had not yet made its way to Europe.

Gutenberg experimented for several years before he succeeded. He used a blend of lead, antimony, and tin to create letter punches for his press, and also worked on designing letters and characters and preparing suitable paper and inks. The press itself was inspired by a wine press, which uses a hand-turned screw to press downward on grapes and force out their juice. The finished product was an early version of what would become the standard Common Press.

In 1456 Gutenberg used his completed press to create The Bible of 42 lines, often known as the Gutenberg Bible and the oldest surviving printed book in western civilization. The success and popularity of his printing press quickly spread, and by the late 15th century presses were in use all across Europe. The development of a printing press with moveable type set the stage for the propagation of printed books and media throughout western civilization.

Common presses originated circa 1500 and remained the standard for printers up to the 19th century. The press consisted of a wooden frame and a wooden or iron printing screw, and it required two men to operate it: the “beater” or “inker”, and the “puller.” First, metal or wooden type was set in the carriage of the press. The carriage is the horizontal moving part of the press, consisting of the coffin—which holds the type—and the tympan, which holds the paper. The coffin could hold up to two sets of type to be printed at once. Once the type was loaded, the inker would use an “ink ball” or roller to spread an even layer of ink over the type. Next, the puller—who had clean, ink-free hands—would set the paper and pull the hinge connecting the coffin to the tympan, pressing the two together. When finished, the paper would be removed from the press and checked. At most, the two men and the press would be able to produce 240 sheets of printed paper in an hour. This number was known as the “token,” a standard unit of pay for pressmen.

The Common Press continued to serve as a popular printing press into the 19th century, until it was replaced by the faster and stronger iron presses in the early to mid-1800s.

Chandler & Price Co. was founded in 1881 in Cleveland, Ohio and manufactured machinery for printers, most notably a series of hand-fed platen jobbing presses. This particular model was first patented on May 26, 1885.

Jobbing presses were letterpress printers designed for small jobs, such as handbills, personal stationery or small books, as opposed

to large projects like newspapers. They were also occasionally used for teaching letterpress printing in high schools or industrial trade schools. One man would be able to operate the press on his own, and the company even manufactured an automatic feeder for the press in the 1920s and 30s to further simplify operations. The earliest jobbing presses were operated by treadle or a hand lever, but moving into and through the 20th century line shafts and electricity were also used. Platen jobbing presses are so called because they used a platen—or a thin metal plate—to apply pressure to the paper and the type bed in order to produce the print, as opposed to presses that use a cylinder.

The Chandler & Price Co. was arguably the dominant seller of presses and printing machinery in the late 19th and early 20th century. Its presses were known for being efficient and long-lasting, unlike many similar presses that quickly wore out and had to be replaced. The company’s “New Series” presses, introduced in the early 20th century, remained popular up until the 1960s, when they were largely replaced by offset lithography. Today, the majority of a jobbing press’s job can be done by photocopiers or desktop computers and printers. However, a few presses can still be found in printing shops and are even favored by some letterpress printers for the production of high-end wedding invitations and similar products.

The linotype machine was, along with letterpress printing, the industry standard for the printing of newspapers, magazines, and posters during the late 19th and early 20th century. The machine’s name came from the fact that it could produce an entire line of metal type at once, instead of requiring letter-by-letter typesetting; hence, line-o’-type.

The linotype machine consists of four main parts: the 90-key keyboard, the magazine, the casting mechanism, and the distributing mechanism. To produce a line of type, the operator first types it into the keyboard. Each key is connected to the magazine, which holds the “matrices” used to compose the type. Each matrix is a small piece of metal that has a specific character engraved on one side, such as a letter or punctuation mark. The necessary matrices are released from the magazine and dropped into the assembler, which holds enough matrices to produce one line of type. When the line is full, the operator sends the matrices to the caster and then begins composing the next line of type. Meanwhile, the casting mechanism of the machine automatically produces a “slug” using an alloy of lead, antimony, and tin.

The completed slug is a freshly cast, solid line of type that can be used up to 300,000 times before it needs to be replaced. When the casting is complete, the distributing mechanism sends each matrix that was used to make the mold for the slug back to its proper place in the magazine. When the operator has finished composing each line of type for a full page, he is ready to print.

Like letterpress printers, the linotype machine remained popular until the 1960s, when it was replaced by offset lithography.

The Miehle Vertical is a vertical cylinder letterpress renowned for its versatility, easily used to complete a wide variety of jobs on

various types of paper stock, from French folio to thin card board, or even envelopes. It is a product of the Miehle Printing Press & Manufacturing Co., which was founded around 1890. The concept for the vertical cylinder press was originally developed by Edward Chesire, a press designer from Milwaukee. Chesire sold the rights to Robert Miehle in 1920 and, after a few modifications, the first Miehle Vertical was completed and ready for sale in 1921.

A cylinder press differs from a plat press most notably in the method used to apply pressure to the paper and typeface in order to print. While a plat press requires the bed of type and the plat to be firmly pressed together in one go, a cylinder press uses pressure from a rotating cylinder to press the paper over the type. In a vertical printing press, the type bed and cylinder move up and down vertically in opposite directions. The fact that the press worked vertically instead of horizontally meant that it took up less floor space.

The vertical press introduced other innovations as well, which allowed for much more convenience and versatility. For example, the press was capable of printing on different sizes and thicknesses of paper without requiring adjustment or resetting, allowing printers to switch quickly between jobs without any hassle. The Miehle press was also known for its durability and ease of use.

Each model of the Miehle Vertical was assigned the letter “V” followed by a number denoting the number of impressions (in hundreds) it was capable of producing. For example, the V-36 had a top speed of 3,600 impressions. The model in the Center for the Book is a V-50, one of the last models produced by the company.